“This excellent volume is the fundamental reference for readers interested in the histories, legacies, and afterlives of fascist architecture and urbanism. The genuine diversity and distinction of the perspectives represented ensures that this will be a touchstone for some time to come.”

“…this book comes as an attempt, both virtuous and solid, to clear some of the confusion coming with the excess of academic and cultural glam recently raised by the discussion on the fascist legacy in Italy, especially when seen through today’s political eye.“

Knowlton School Professor of Architecture Kay Bea Jones has published The Routledge Companion to Italian Fascist Architecture: Reception and Legacy, with co-editor Stephanie Pilat, an associate professor, and director of the Division of Architecture at the University of Oklahoma. 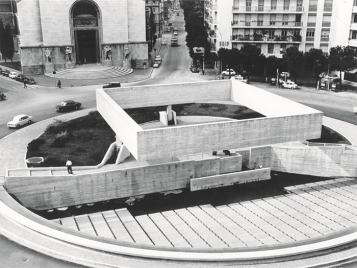 Nearly a century after the National Fascist Party came to power in Italy, questions about the built legacy of the regime provoke polemics among architects and scholars. Mussolini’s government constructed thousands of new buildings across the Italian Peninsula and islands and in colonial territories. From hospitals, post offices and stadia to housing, summer camps, Fascist Party Headquarters, ceremonial spaces, roads, railways and bridges, the physical traces of the regime have a presence in nearly every Italian town. This critical history of interpretations of fascist-era architecture and urban projects broadens our understanding of the relationships among politics, identity, memory, and place.

The Routledge Companion Italian Fascist Architecture investigates what has become of the architectural and urban projects of Italian Fascism, how sites have been transformed or adapted and what constitutes the meaning of these buildings and cities today. The essays include a rich array of new arguments by both senior and early career scholars from Italy and beyond. They examine the reception of fascist architecture through studies of destruction and adaptation, debates over reuse, artistic interventions and even routine daily practices, which may slowly alter collective understandings of such places. Paolo Portoghesi sheds light on the subject from his internal perspective, while Harald Bodenschatz situates Italy among period totalitarian authorities and their symbols across Europe. Section editors frame, synthesize and moderate essays that explore fascism’s afterlife; how the physical legacy of the regime has been altered and preserved and what it means now.

Jones’ research interests include modern and contemporary Italian architecture. Her previous book is on the architecture of Franco Albini, Suspending Modernity (Ashgate Press, 2014). She has recently conducted research in Italy on the design culture of Adriano Olivetti and the Olivetti Company as a recipient of a 2018-2019 Fulbright U.S. Scholar award.

The Routledge Companion to Italian Fascist Architecture: Reception and Legacy is available at Routledge and Amazon.